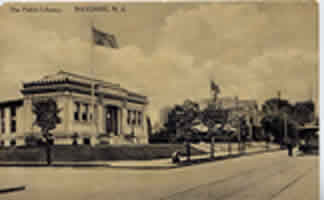 On Memorial Day in 1959, the library was gutted by fire, and the central part of the interior and roof were badly burnt. The Bayonne Public Library was restored at a  cost of $1.25 million and opened its doors again to the public in 1963.

In 1989 it was officially rededicated as The Free Public Library & Cultural Center of Bayonne. The Mary O'Connor Gallery of the library presents performing and visual arts and interactive events to its community. Various meetings and cultural programs are held in the basement of the library building.